North Shore Surfer Girl Coco Ho has just won the Association of Surfing Professionals, ASP 2009 World Qualifying Tour at the final event in Brazil. 2009 is her first full year on the ASP World Tour and she’s still in the running to win the ASP World Championship Tour which will wrap up on the North Shore of Oahu in December. 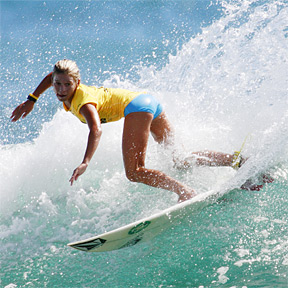 Coco who is sponsored by Volcom, Nike 6.0 and Warrior Wetsuits had this to say upon learning that she had won the WQS; “I have been focusing on the World Tour this year, and I’m having a good year there, so winning the WQS is such a great bonus for me.”

Coco was born and raised on the North Shore of Oahu. She’s an a friendly and articulate young lady who has been surfing real North Shore waves since she was a little girl. Her father is surfing legend Michael Ho and her uncle is World Champion surfer Derek Ho.  She played a young Ann Marie in the Movie Blue Crush and is one of the finest female surfers the North Shore has ever raised.

P.S. Coco won her first WCT event in Portugal on October 30th, 2009. NSSG will be rooting for her to win the Van’s Triple Crown of Surfing this winter on the North Shore. Go Coco, Go!

About the Author: Carol